CROMWELL, Conn. – Not even pouring rain could stop The Miz from being “Awesome” on the golf course. The WWE Superstar entertained and delighted the WWE Universe and PGA Tour fans in his first, albeit wet, Travelers Celebrity Pro-Am to help raise funds for charity. (PHOTOS | WATCH)

“Whenever I can get out and go golfing, especially for a good cause, it always makes everything worthwhile,” The Miz said.

“It was my first time ever playing here and it was incredible. I think a lot of my shots were better than Vaughn’s, who was our pro today,” The Miz joked.

“Gronkowski, Joe Pesci and myself kept the crowd alive. And they were loud! They were cheering, they were booing.”

Each year the Travelers Championship donates its net proceeds to 130 Connecticut charities. One of the organizations the Pro-Am helped raise funds for is Connecticut’s Hole in the Wall Gang Camp, a center founded in 1988 by Paul Newman that helps children with cancer, sickle cell anemia and other illnesses. The Miz met several child 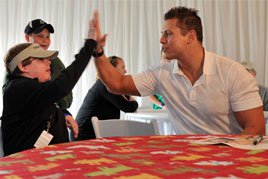 ren from the camp before the Pro-Am.

“We’re raising money for kids with illnesses who can go to a camp to feel normal, feel like they can do whatever they want to do. It’s a pretty great camp,” the former WWE Champion said.

After a morning rain delay, The Miz and his foursome kicked off nine holes of golf. Despite wet course conditions and a few sprinkles which again turned into downpours, the WWE Superstar refused to quit – or even put on a rain jacket.

“I was in the rough a few times and I got out of it pretty good, I think. I hit a lot of great shots. The problem is, I don’t get to practice that much because WWE is always traveling 250 days a year. I don’t have time to golf,” The Miz explained. “So it was actually great to get out there again. It reminded me of back in the day when I used to go with my dad all the time, except I didn’t have my dad yelling at me the entire time, which was great. Instead I had Joe Pesci.”

The Superstar revealed that Pesci had plenty to say about The Awesome One’s abilities on the links.

“Basically [Pesci’s] quote was, ‘Character-wise, The Miz is worse than Bill Murray on a golf course,’ which I will take as a compliment. Bill Murray is one of the greatest actors and comedians of all time. And if I am better than him at something, especially on the golf course, that’s fantastic for me. So Joe Pesci enjoyed playing with me.”

The dedicated Mizfits in the crowd – complete with “Hello, I’m Awesome” T-shirts – remained until the 9thhole, cheering their favorite WWE Superstar through difficult, wet shots in the rough.

“There were a ton of Mizfits out there. I was shocked. And they walked with us the entire time, which was incredible. I think they saw that I am the greatest golfer in the world. I will entertain them in the ring, as well as on the golf course,” The Miz said.

The Miz stopped to pose for photos and sign autographs for many of The Mizfits at the TPC River Highlands, including Steve Fiano of Bolton, Conn., who, with a friend, waited outside in the rain since 7 a.m. to see their favorite Superstar.

“You don’t really get a chance to meet a guy like him too often, so I had to come out and see him,” Fiano said. “It’s worth it for The Miz. If anybody else was here, we wouldn’t be here, but The Miz is here, so that’s awesome.”

While on the links, The Miz even discovered a possible (and equally-imposing) new tag team partner – the 6-fo 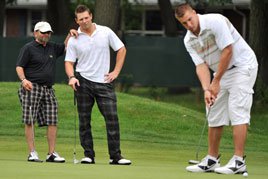 “The Gronk & The Miz – I think we’ll be a great tag team with WWE, as well as a great tag team with the Patriots. If he ever needs me out there to run a route, to make some blocking for him, I will have no problem doing that. If I need him in the ring, he’s there for me. Maybe he can tackle someone and I can Skull-Crushing Finale the person. It’ll be great.”

And as for the professional golfers, The Miz is certain he’s met his match in one of the PGA Tour’s most colorful players, former PGA Championship and British Open winner, John Daly.

“He’s a great guy and I talked to him for a little bit. … He actually had a shirt that said ‘Loudmouth,’” The Miz explained, referring to Daly’s partnership with the Loudmouth Golf clothing line. “I like to think of it as the biggest loudmouth on the golf course versus the biggest loudmouth in WWE. So if it’s The Miz vs. John Daly – who’s going to win? I think the fans.”

For more on the Travelers Championship, visit travelerschampionship.com. For more on The Hole in the Wall Gang Camp, visit holeinthewallgang.org.