Linda Sánchez, a member of the United States House of Representatives from California’s 39th congressional district, recently addressed the U.S. Congress about the problems of school violence and bullying, and cited the be a STAR alliance as a positive teaching aid in schools. Her remarks were recorded in the Sept. 15 edition of the Congressional Record.
(VISIT BEASTARALLIANCE.ORG)

“Through its participation and leadership in the [be a STAR] alliance, WWE has demonstrated a real commitment to raise awareness about bullying, and is working in local communities around the country and overseas to combat bullying in our schools,” Sánchez said in the Congressional Record, which is the official record of the proceedings and debates of the United States Congress.

“Bullying is not a rite of passage and no child should be afraid to go to school. An unsafe school environment, including one made unsafe by daily bullying and harassment, leads to increased absences and decreased graduation rates,” she told Congress.

Sánchez introduced the Safe Schools Improvement Act, which helps “schools and school districts develop and improve anti-bullying and anti-harassment initiatives.” She used be a STAR as a model example.

“One effort to combat bullying in our schools is the ‘be a STAR (Show Tolerance And Respect) program’ being led by WWE in collaboration with the Creative Coalition, the National Education Association's Health Information Network, NEA HIN, Stomp Out Bullying, the Gay & Lesbian Alliance Against Defamation, and the National School Climate Center amongst others.”

Sánchez pointed out that be a STAR provides teachers with tools and a free teaching aid to teach students an important anti-bullying message that meets National Education Standards.

“This teaching aid is available at no cost to educators, and is designed to promote positive and equitable social environments for students within and beyond the classroom setting," the Congresswoman explained. "The alliance is also offering a "Start Your Own Be a STAR" Chapter toolkit, encouraging students to spread the anti-bullying message in their schools and communities.”

Sánchez recognized the importance of the be a STAR pledge, which students around the country have taken as a promise to eradicate bullying. 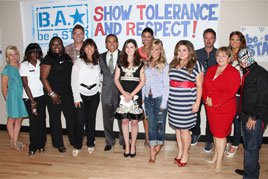 ance through its 'be a STAR' pledge.”

The Congresswoman spoke highly of the be a STAR anti-bullying rally she participated in during SummerSlam weekend in Los Angeles. (PHOTOS)

“I had the opportunity to participate in anti-bullying events with WWE Superstars Rey Mysterio and Eve, Los Angeles Mayor Antonio Villaraigosa, American Idol Winner Jordan Sparks, actor Tim Daly, Dancing with the Stars' Chelsie Hightower and many more. I joined them at the Algin Sutton Community Center to discuss with children the issue of bullying and to deliver a strong anti-bullying message of tolerance and respect. The reaction from the more than 500 children and families that participated was very positive.

Sanchez praised be a STAR to U.S. Congress as a prime example of how America can stop school violence and bullying.

“The anti-bullying movement has a new champion in the 'be a STAR' Alliance, co-founded by WWE and The Creative Coalition and I want to commend them for the great work they are doing to promote equality for all people regardless of age, race, religion and sexual orientation.”