Clash of the Toy-tans II: R-Truth vs. "Hacksaw" Jim Duggan

Ever the patriot, “Hacksaw” Jim Duggan has always subscribed to U.S. President Theodore Roosevelt’s iconic ideology : “Speak softly and carry a big stick” – the latter half of it anyway. R-Truth, meanwhile, adheres to a very different policy as it pertains to the WWE Universe: If you’re a “Little Jimmy,” you’re gonna “get got.” 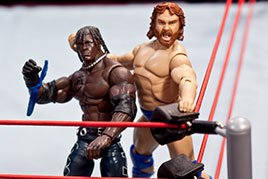 Presented with an opportunity to tangle with the biggest “Little Jimmy” of them all, Truth agreed to a bout with the flag-waving WWE Hall of Famer, whose happy-go-lucky attitude has all too often belied his powerhouse offense and indomitable fighting spirit, symbolized by the red, white and blue banner he holds so dear.

Hailing from the relatively peaceful city of Glens Falls, N.Y., Duggan no doubt respects Truth’s rise from the roughest neighborhoods of Charlotte, N.C., to WWE Superstardom. He’s perhaps even bumped Truth’s outmoded “What’s Up?” entrance music in the car from time to time. But when Truth began disrespecting his fans and spitting insults at the WWE Universe instead of rhymes, the burly former United States Champion knew it was time to show this “tough guy” – also a former U.S. Title holder – that it was time to change his tune. 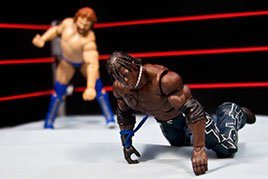 At 6-foot-3 and 270 pounds, Duggan has a clear size advantage in this bout, along with ample in-ring experience that earned him a place in the hallowed WWE Hall of Fame in 2011. Yet, Truth’s apparent multiple personalities only add to the unhinged Superstar’s unpredictability, forcing Hacksaw to ponder which version of the hip-hop hot-head he’s facing.

Duggan, meanwhile, feeds off the energy of the WWE Universe every time he gets in the ring, using his “U.S.A.” chants to whip American crowds into a frenzy and fluster his opponents regardless of their level of patriotism. Truth, conversely, gave his fans “the boot” in pursuit of championship glory and refuses to expend any energy entertaining  them – allowing him to focus entirely on pummeling his opponent until he’s  able to execute his dreaded signature maneuver: The Lie Detector. Fueled by belief that there is a vast conspiracy against him, Truth trusts no one in his quest to show the world that “The Truth” hurts. 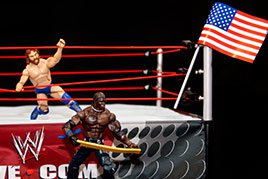 Hoisting his iconic 2x4 high into the air, Hacksaw bellows his equally iconic “Hoooooo!” battle cry to catch Truth off-guard as the match is underway. However, the twisted and bitter Truth – knowing Duggan’s emotional attachment to his plywood, snatches it up and snaps it in half at ringside, right in front of a group of young WWE Universe members holding their own foam replicas of the wooden equalizer.

Truth assumes that splintering Hacksaw’s 2x4 would give him a psychological edge in this encounter but soon finds himself on the receiving end of a series of powerful blows as the star-spangled brawler avenges the loss of his most prized possession before repeatedly sending the conspiracy theorist into the turnbuckles. 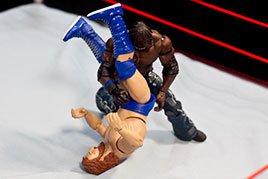 Dazed, Truth does not notice Hacksaw lowering himself into his legendary three-point stance – a clear indicator that his patented running football tackle is just moments away. With speed on his side, Truth narrowly dodges the punishing maneuver before rolling up the big man for the three-count to steal the win.