Clash of the Toy-tans II: Randy Orton vs. Jake "The Snake" Roberts

If the serpents of the squared circle were to ever cross paths, both The Viper, Randy Orton, and Jake “The Snake” Roberts would be forced to unleash their most venomous offenses to slither forth as the victor. 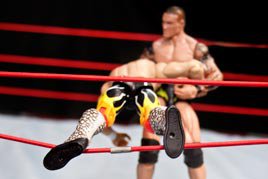 The Viper, explosive and unpredictable, earned his scales by way of cold-blooded, calculated onslaughts rendered to names known far and wide. Switching from Legend Killer to WWE’s recognized Apex Predator over the years, Randy Orton has felled John Cena, Dusty Rhodes, Shawn Michaels, Mick Foley, Triple H. A thorough combination of psychological and intensely physical warfare has garnered Orton’s most notable accolades, including both the WWE and World Heavyweight Titles – the latter of which he snared in 2004 to become the youngest World Champion in history.

Across from Orton employing the iciest of glares stands his plastic foe in Jake Roberts. The reptile toting WWE Legend is much better known for carrying snakes than titles, though making ample impact over the years with his pythons and cobras. Ophidiophobics weren’t the only men who feared Roberts and that fear wasn’t exclusively due to his choice in pets. With a tundra-cold heart and wicked thoughts clouding his mind, Roberts capitalized on the consternation of even the largest of foes, Andre the Giant, en route to a memorable career. 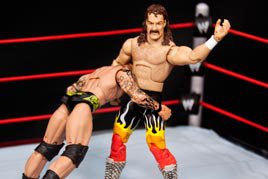 While strategy and psych-outs play a key role in their respective fame, both Orton and Roberts rely on their snake-like, end-game quick strikes to overcome opponents. The two so evenly matched, it comes down to how much of their rival’s venom each man can withstand, and of course, a duel between the RKO and the DDT.

THE VICTOR
Enduring Orton’s own ring rope-leveraged DDT, “The Snake” wrests the upper hand with his signature short-arm clothesline and charging knee to the skull, then readies for the DDT, perhaps intent on crafting a new pair of snakeskin boots of the viper variety. 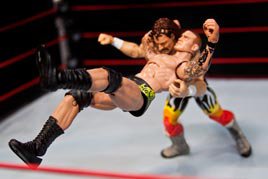 But Orton is more than prepared, slipping loose of Jake’s clutches and taking advantage of the close contact and proximity to seize Roberts in his tattooed coils for an RKO. The serpentine veteran is equally prepared, however, and thrusts his way out of danger. Off the ropes, The Viper charges at Jake, who ducks as Randy goes laterally reptilian with a leapfrog then stuns his rising foe with the fate-sealing RKO in the center of the ring.