Clash of the Toy-tans II: Rick "The Model" Martel vs. Cody Rhodes

Looks and athleticism define both “The Model” Rick Martel and the formerly dashing Cody Rhodes, making for a bout of – in more ways than one – striking Superstars. 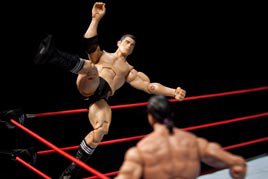 Rick Martel’s lithe offensive, mid-ring cartwheels and signature Boston crab put some credibility behind his camera-ready pucker. Still, The Model’s vanity was so prevalent that he was actually able to capture it in a bottle. His aptly labeled au de toilette, “Arrogance,” was more than just the concentrated conceit of the former World Tag Team Champion. In fact, this spray made Martel come out smelling better than many Superstars as the underhanded veteran used it to distract and even blind his rivals, including Jake “The Snake” Roberts. 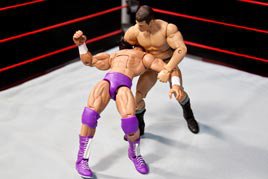 By contrast, Cody Rhodes was content with simply his mirror reflection rather than a pair of fashionable Ray-Bans and a lapel button reinforcing his model-hood. The demise of his dashing demeanor in lieu of a darker, society-disgusted mentality led to the birth of a new Rhodes, masked and obsessed with concealing the visages of the WWE Universe at large.

Similar to Martel in his tag team title successes, Rhodes – the son of “The American Dream” himself – leveraged his lineage to become one of WWE’s youngest, most prominent rising stars. 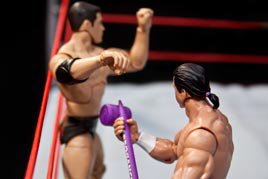 ANALYSIS
Rhodes and Martel are fairly matched in agility, quickness and athletic ability. The Model infamously relied on making opponents believe he was more consumed by his appearance than competing – an underestimation to which Cody Rhodes is not prone.

All the ne’er-do-well tactics of Martel are well countered by Cody’s aggression and focus on inflicting punishment.

THE VICTOR
The tides turn a slew of times in a catch-as-catch-can clash of plastic pawns. 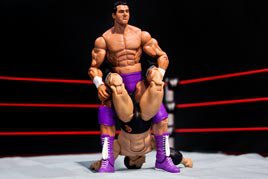 When Martel puts the brakes on at the cusp of a Cross Rhodes, he turns desperate and lunges to the corner for a refreshing spritz of Arrogance … to the eyes of his enemy.

Sprayed in the face, Rhodes staggers back and Martel capitalizes by felling the second-generation Superstar and applying the Boston crab. There’s no escape for Cody, who submits within The Model’s grasp.

WWE Raw results, May 18, 2020: McIntyre stands tall against Corbin as The All Mighty waits