Clash of the Toy-tans II: John Cena vs. The Ultimate Warrior

Dueling irresistible forces would nearly tear the WWE Universe asunder in an epic fantasy match between John Cena and The Ultimate Warrior, two of WWE’s most chiseled champions. 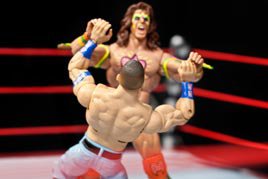 The WWE Universe knows John Cena. A dogged, passionate fighter with Titanic-sized resolve and the heart of a champion – 11 times over, to be precise. In his high-tops and denim shorts, Cena’s greatest ornamentation has always been either the World Heavyweight or WWE Title. And he’s achieved nearly a dozen reigns as World Champion with a mix of strength, tenacity and energy siphoned from WWE fans, even overwhelming jeers.

But if any WWE Superstar in history knows about drawing power from the WWE Universe, it’s The Ultimate Warrior. Bedecked in fluorescent garb matching his neon warpaint, this snarling, muscle-bound specimen charged his way down the aisle, past his opponents and through the 1980s and ‘90s as one of the most recognizable Superstars in WWE history. 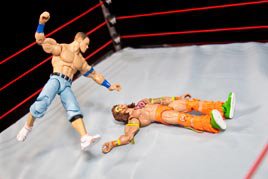 ANALYSIS
It’s difficult to say, but for once, The Cenation Commander-in-Chief just might be physically overpowered standing toe-to-toe with an unstable combatant in fluorescent face paint. Loyalty, respect? The Ultimate Warrior devours all of it. Hustle, however, is the one attribute Cena can exploit to bring down the ultimate challenger. As part of that hustle, Cena must keep his burly rival away from the ropes which have proven to be the conduit of Warrior’s energy, wildly shaken by the behemoth until suitably refueled. 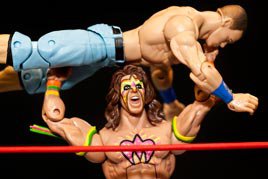 Alas, like Andre the Giant, Hulk Hogan and others individually learned, nothing can be thrown at the Warrior that he cannot withstand. Warrior’s unmatched might humbles Cena, who is blasted with powerful clotheslines and fists in between being hoisted and slammed.

THE VICTOR
True to form, Cena endures a body battering barrage and Warrior aims to project The Champ out of the ring with a press slam. The Cenation leader escapes and fires back with a shoulder tackle and ensuing Attitude Adjustment. Not enough. Top rope legdrop – also not enough. 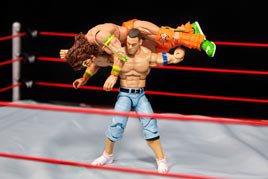 Resolute and determined to chop down the leviathan in front of him, Cena climbs for one more legdrop which misses its mark and renders him susceptible to Warrior’s slowed yet potentially clash-closing big splash. Within an instant, Cena draws up his knees into the belly of the beast, quickly regains his position and delivers a second Attitude Adjustment.

The shrewd Cenation Commander-in-Chief seizes an all-important opportunity to end the struggle, perching Warrior up for a third and final AA. With great tumult, the fringed frenzy of The Ultimate Warrior is eclipsed as Cena completes the triumvirate of his signature moves for just as many counts by the referee – a pinfall victory.