A consummate entertainer whether he’s dominating inside the ring or rocking a crowd with Fozzy, Chris Jericho has been in the spotlight for the majority of his adult life. Thanks to his longtime familiarity with the pressures of performing on a variety of stages around the world, the “best in the world at what he does” was able to keep the butterflies at bay as he and Cheryl Burke, “Team Chericho,” faced potential elimination in the third week of ABC’s Dancing with the Stars.

“I felt calm and confident, because my performance the night before was really emotional and connected with a lot of people,” Jericho told WWE.com. “Still, as the names were whittled away and I was the only one left with Wendy Williams, I started thinking, ‘Oh my God! I have nothing to wear on Jimmy Kimmel Live tonight!’  When you get kicked off, you go straight to Kimmel, and I was like, ‘Is it really going to be me? Are you kidding?’

On “Personal Story Week” of DWTS, contestants were tasked with developing a dance that told a tale from their own lives. Jericho decided to rumba to the Beatles’ “Let It Be,” a song that will always remind him of his late mother, who passed away in 2005. His performance was dedicated to her.

“I wanted to do something that opened the door, because a lot of people in Hollywood and watching at home don’t know who Chris Jericho is,” he said. “They stereotype me as ‘the WWE guy.’ I wanted to show [who I am] deeper down inside and showcase some of the things I’ve had to live with for years. It’s like a great match. You can have the most technical performers in the world, but if there’s no personality or story behind it, nobody cares.”

Thankfully, the judges – not to mention the roaring crowd in attendance – undoubtedly cared. Team Chericho’s stirring, heartfelt rumba garnered across-the-board 7’s from the show’s judges, for a total score of 21/30.

“When you have three strangers shed a tear watching your story, I think it’s ‘mission accomplished,’ because that’s what show business is all about,” Jericho said. 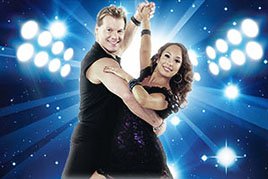 That mission seemed to be in jeopardy during the results show last week, when Jericho stood alongside Williams – an entertainment personality and talk show host – as the “final two” of the evening. In speaking with WWE.com, Jericho was quick to point out that being in that precarious position does not necessarily mean he had one of the lowest scores.

“You can have the top two vote-getters and the loser in the final three, so it’s not indicative that these three people have the lowest totals on the show,” Jericho said. “So I could have had the most votes, for all I know!”

Even though Williams was ultimately sent home, the first-ever Undisputed Champion’s brush with elimination has inspired this determined competitor to raise the bar in the weeks ahead.

“It just proves that you just never know and that every vote counts,” he said. “If anyone’s watching the show and not voting, and they want me to stay around, make sure you vote, because you never know.”

Jericho’s confidence on the dance floor has increased dramatically over the past few weeks, yet each dance presents a unique set of challenges. Jericho’s partner and trainer Cheryl Burke reminds him of this as she puts the multi-time World Champion through his paces.

“Every week we show up for a new dance,” Jericho explained. “It’s hard and it’s still very physically demanding; not in a cardiovascular way, but in a yoga way. When doing the pasodoble [double-step], it’s all about shapes and forms.”

He continued, “At the end of the day, I really feel like I’ve been in a match, and I get up sore in the morning. My knees hurt, my back hurts … it’s like I’ve just been in the ring with Kane or something like that. You get used to it, but every week it’s something new. And when you’ve never done anything before, it’s a challenge.” 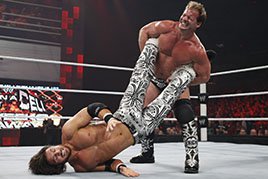 The challenge is a worthy one, though, especially as Jericho considers his future in the ring. After being punted in the skull by Randy Orton last September, Jericho hasn’t set foot in the squared circle. However, Jericho affirmed that his DWTS experience will prove beneficial should he exhilarate the WWE Universe once again.

“I’m probably in the best shape of my life doing this,” Jericho said of his dance training. “I think I’ve really impressed the judges and a lot of the fans, because they didn’t expect me to be that light on my feet. I think really honing in on that lightness and quickness will make me a much better performer in the ring.”

Upon his potential return to WWE, Jericho might have some company from his Team Chericho cohort.

“Cheryl keeps saying that if we win, she wants to be a Diva,” he revealed. “She’s definitely got the attitude and the firepower for it. She’d be very nimble and could do a lot of athletic maneuvers. And if there are ever any Diva Dance-offs, she would win every one of them.”

His parting words for the legions of “Cherichoholics” and the WWE Universe at large?

“I’m sure over the next few seasons you’re going to see other WWE Superstars on the show, so if you want to see more, the best thing you can do is vote, vote, vote,” Jericho said. “I feel like a real ambassador for WWE right now. Every time I do something on the show that people applaud, I feel like that’s another step up for WWE, because there’s a perception about what we do. This is a chance to change that perception and let people know that we’re some of the most entertaining performers with the best fan base in the world.”

To learn how you can cast your votes for Team Chericho on this season of Dancing with the Stars, click here.