Survivor Series 2011 will always be remembered as the night that The Rock returned to the ring, put “boots to asses” and proved that after seven years, he’s still got it.

However, another WWE Legend received a huge ovation from the WWE Universe inside Madison Square Garden, a surprise return that reminded the sold-out MSG crowd and millions watching around the world that WWE’s November annual is truly rich in tradition and history. As a counter to Alberto Del Rio’s personal ring announcer, CM Punk revealed his own ring announcer for the evening: WWE Hall of Famer Howard Finkel.

A mainstay of WWE throughout the ‘80s and ‘90s, the signature voice of “The Fink” has often garnered him the distinction of being one of the greatest ring announcers in history. 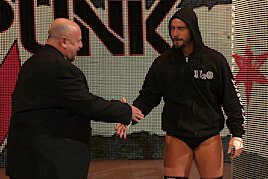 Hearing the legendary announcer introduce “The Voice of the Voiceless,” and anoint CM Punk as the “NEWWWW” WWE Champion at Survivor Series was not only an honor for Punk, but a welcome treat for our longtime fans. Furthermore, this was a chance for young fans to hear “The Voice” that has introduced countless iconic Superstars, including “Stone Cold” Steve Austin, Hulk Hogan, The Ultimate Warrior, The Undertaker and The Rock.

For The Fink, returning to Madison Square Garden was a night he will never forget. “This building is hallowed to me,” Fink told WWE.com. “I have been coming here since January 17, 1977. Each and every time I got in the ring, no matter whom I was introducing or when, I’ve always had fun.”

The WWE Hall of Famer, who served as ring announcer inside Madison Square Garden at the inaugural WrestleMania in 1985, has witnessed many memorable moments in The Garden’s history, though the evening of Nov. 20, 2011, now ranks high for him.

“I’d have to say Survivor Series 2011 will be in my top three favorite Garden moments.” Finkel said with a smile. “I’ll forever remember it because of the rush I got and the adulation of the WWE Universe in New York City. It meant so much to me because I have always given everything I have when I ring announce. As I said when I was inducted into the WWE Hall of Fame, no matter who I was introducing, I always wanted them to feel as though they were heading into the main event.”

While The Fink was certainly ecstatic about introducing CM Punk, he also mentioned two other Garden moments that have always resonated with him. “Certainly being a part of the very first WrestleMania in 1985 was phenomenal.” he recalled. “Also I will always remember my very first announcing duties inside the Garden: January 17, 1977, with the main event of Bruno Sammartino against Ken Patera.” 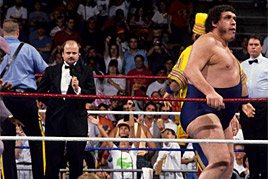 Howard has introduced a number of WWE Champions over the years and knows what it takes to wear the prestigious title. “CM Punk certainly makes a great champion because he is for the people. He is ‘The Voice of the Voiceless’ and then some. Punk not only wants to represent himself, but many of us in the WWE Universe, and that’s why I think he resonates as a very positive champion.”

And what of the ring announcers that have succeeded him? Ricardo Rodriguez immediately comes to the WWE Hall of Famer's mind.

“Ricardo is lucky he has a meal ticket from Alberto Del Rio, as far as I’m concerned,” Fink expressed. “I saw Ricardo once in the locker room, and he said to me, ‘Howard, you were great in 1990. But this is 2011 and you are no longer relevant.’ Well, after the reaction I received at Survivor Series, I truly believe that relevant is my middle name!”

Indeed you are relevant, Howard. And that's more than just the Garden crowd talking.