Here are my takes on the noteworthy developments in the WWE over the past week:

Eck’s Factor: I’m a horror movie buff, so I thought the thread of Kane stalking Ryder and Eve throughout Raw this past Monday was compelling. I especially liked the 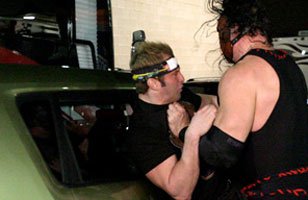 shot of Kane in the mirror in the background while Ryder was brushing his teeth – very John Carpenter-esque. Involving Ryder in the John Cena-Kane rivalry has  added another layer to the story and given Ryder a rub. Sure, Ryder’s main role is to be Kane’s victim, but on the bright side, he’s the U.S. Champion, the best friend of the top guy in the company and the potential love interest of Eve. Seems like this sports-entertainment thing is working out pretty well for “Long Island Iced-Z.” Luckily for him, changing a flat tire efficiently isn’t a job requirement.

Talking point: Chris Jericho still has nothing to say

Eck’s Factor: He did it to us again. Just like when he returned to Raw the week before, Jericho came out on Raw this past Monday night, fired up the crowd and then left without saying a word. The difference was that this time, he was seemingly overcome with emotion as he soaked up the cheers. What a crazy turn of events: Hornswoggle now talks, but Jericho doesn’t. It’s unclear what Jericho is up to, but I’m enjoying whatever game he’s playing. When he finally does have something to say, I’ll definitely being hanging on his every word.

Eck’s Factor: Clay’s failure to debut (or re-debut, to be more accurate) on Raw week after week became a running gag, but the big man finally showed up on Monday. It was a memorable appearance, to say the least. I’m guessing the majority of fans were expecting to see a monster heel, but instead they got “The Funkasaurus.” The WWE Universe’s initial reaction to Clay as a smiling, dancing teddy bear has been mixed, but I think Clay is going to get over in a big way. He actually reminds me a bit of Dusty Rhodes (the yellow polka dot-clad version of “The American Dream,” not the three-time NWA World Champion). The bottom line is that Clay has a unique look and a ton of personality, and he’s a believable butt-kicker who can cut a decent promo. On top of that, his dancers (Naomi and Cameron Lynn) are certainly easy on the eyes, and I have to admit that I haven’t been able to get his entrance music out of my head all week (“Somebody call my momma!”). My only question is: what did Executive Vice President of Talent Relations and the Interim General Manager of Raw John Laurinaitis think of Clay’s debut?

Talking point: Edge, The Four Horsemen to be inducted into the WWE Hall of Fame 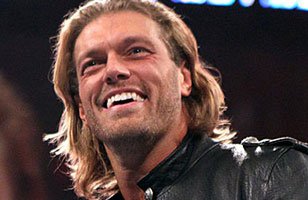 Eck’s Factor: Edge going onto the Hall of Fame this year is bittersweet. There’s absolutely no question that the Rated-R Superstar is deserving of the honor, but it’s a shame that his inclusion is happening this soon. Edge is only 38 and was at the top of his game when he followed his doctor’s advice and retired last April due to serious spinal issues. If circumstances were different, Edge would undoubtedly be in one of the headline matches at WrestleMania XXVIII instead of wearing a tux on stage and reminiscing about his career the night before. Like Edge, The Four Horsemen are also a no-brainer selection. They set the standard for heel factions and were big-money players for the Crockett promotion in the ’80s and WCW in the ’90s. The version of the Horsemen that has been selected for induction – Ric Flair, Tully Blanchard, Arn Anderson, Barry Windham and manager J.J. Dillon – was the best, in my opinion, though a case could certainly be made that Ole Anderson, an original member of the group, should be inducted as well. On a side note, Flair will be the first person in the WWE Hall of Fame to go in as a singles performer as well as a member of a group.

Eck’s Factor: Bryan overcame the odds and escaped with his championship yet again on SmackDown Friday night. This time, Bryan’s match against Big Show was stopped when his girlfriend AJ – who was standing outside the ring during the contest – was taken out on a stretcher after Big Show inadvertently ran into the diminutive Diva while chasing the champion. Afterward, Bryan berated a distraught Big Show, who was in tears over the incident. The question is whether Bryan was genuinely upset about what happened or if he somehow weaseled his way out of another seemingly no-win situation against Big Show. All I know is that, for me, Bryan has become the most interesting Superstar in WWE over the past few weeks. 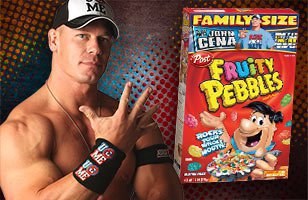 Eck’s Factor: The Rock has mockingly said that Cena looks like a bowl of Fruity Pebbles due to his penchant for brightly colored T-shirts, but Cena is the one who’s laughing now. Cena recently signed an agreement with Post Foods to appear on three million boxes of the breakfast cereal from this month through March. In response to the news of Cena’s deal, The Rock tweeted that he hoped his endorsement check was in the mail. I don’t know about that, but I am surprised that Rock never signed a deal with Sara Lee. Now if only CM Punk could get his WWE ice cream bars...

Eck’s Factor: The 100th episode of NXT airs next week and will feature the wedding of Maxine and Johnny Curtis. For those who don’t regularly watch the show (which is broadcast in a number of international markets in addition to being shown on WWE.com), you’ve missed out on an entertaining love triangle between Maxine, Curtis and Derrick Bateman, three talented performers who have bright futures in the WWE. Televised wrestling weddings are almost always fun, and something tells me that Maxine and Curtis won’t be able to get hitched without a hitch.

WHO IS KEVIN ECK?
For those who are unfamiliar with me, I come to WWE from The Baltimore Sun, where I was an assistant sports editor and the author of a pro wrestling blog titled Ring Posts. In between two stints with The Sun, I worked as the editor of WCW Magazine from 2000 to 2001.