Here are my takes on the noteworthy developments in WWE over the past week:

Talking point: Daniel Bryan cashes in his Money in the Bank contract and wins the World Heavyweight Title at TLC

Eck’s Factor: I have to admit that I was among the people who suspected that Bryan was going to be the first person to cash in a MITB contract and not win the title, so it was a pleasant – and shocking – surprise when Bryan successfully cashed in on The Big Show moments after Big Show had defeated Mark Henry for the championship in a Chairs Match. Who would have ever dreamed that Internet darlings (and I don’t mean that as an insult) Bryan and CM Punk would be the holders of WWE’s two most prestigious championships? As part of the fallout from the turn of events at TLC, we now have a compelling story with Bryan and The Big Show, who finally ended his nine-year world title drought only lose it to his little buddy Bryan about a minute later. 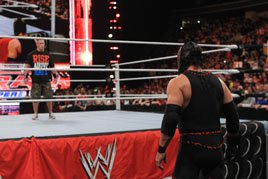 Eck’s Factor: Well, now we know that Cena wasn’t just in the wrong place at the wrong time when Kane attacked him on the Dec. 12 episode of Raw. Kane applying a menacing clawhold to Cena’s face and Cena selling it with a rare look of fear made for a strong segment on this past Monday’s Raw. I like the twist of having Kane return as a heel to have a program with Cena rather than doing the predictable thing of Kane seeking revenge against Mark Henry, the man who put him on the shelf for five months. It’s unclear at this point what Kane’s beef is with Cena, but I’m definitely intrigued. Despite the fact that Cena and Kane have been in WWE together for nearly a decade, their paths have rarely crossed, so the matchup feels fresh.

Eck’s Factor: Punk, The Miz and Alberto Del Rio stole the show at Sunday’s pay-per-view with their TLC Triple Threat Match for the WWE Title. With John Cena out of the title picture for now, Punk has a great opportunity to show that he can be “The Man,” and if TLC is any indication, he is well on his way to doing so. I had my doubts as to how entertaining TLC would be without Cena, but the show more than delivered and Punk had a lot to do with that. On a side note, kudos to Ricardo Rodriguez for taking the biggest bump of the night – a 20-foot fall from the top of a ladder through a table on the floor. 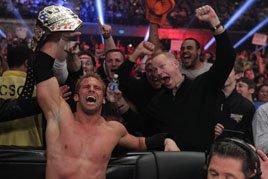 Eck’s Factor: I became a Ryder fan years ago during his time in ECW, but I always believed he was an entertaining mid-carder and an underrated worker and nothing more. After witnessing Ryder’s breakthrough victory live at TLC in Baltimore, however, I’ve officially joined the Ryder Revolution. He and Ziggler had an outstanding match and the crowd was incredibly hot for Ryder. I’m a big proponent of Ziggler getting a main-event push, but last Sunday was Ryder’s time and he is deserving of a run as the U.S. Champion. I give Ryder a ton of credit for taking the initiative when he was an afterthought in WWE and working hard to get himself over. Could 2012 be The Year of the Broski? I wouldn’t bet against him.

Eck’s Factor: Due mostly to Nash’s physical limitations, a number of fans and pundits were skeptical of whether the former Kliq members could put on an entertaining match at TLC. With Triple H in there, however, I wasn’t really worried about the match quality, and I also had a feeling that Nash would rise to the occasion – and he did. Nash taking a bump off a ladder and through a table certainly was unexpected, and a beaten-down Nash flashing the Kliq sign right before Triple H clobbered him with the sledgehammer was a nice touch. If the match turns out to be Nash’s swan song in WWE, he went out on a good note. 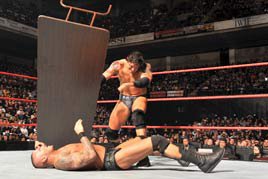 Eck’s Factor: Orton defeated Wade Barrett in a Tables Match at TLC, but that certainly didn’t end their feud. The next night on Raw, Barrett returned the favor by putting Orton through a table. I’m glad the issue between Orton and Barrett remains unsettled. The program is elevating Barrett, who is proving once again that he has what it takes to be a big-money player, and it also seems to be re-invigorating “The Viper.”

Eck’s Factor: Yes, it’s true. Following the lead of his favorite WWE Superstar Zack Ryder, Mr. Belding (aka actor Dennis Haskins) of “Saved by the Bell” fame is pushing an online petition on Twitter (@mrbeldingforrawgm/principle) to become the general manager of Raw. I wonder what the Executive Vice President of Talent Relations and the Interim General Manager of Raw John Laurinaitis thinks about this. As far as iconic TV principals go, my guess is that Laurinaitis is more of a Mr. Woodman guy. I actually think Haskins, who is a longtime WWE fan, would make a decent GM. He certainly couldn’t be any worse than Mike Adamle, and he’d definitely be less annoying than fellow wrestling fan and former “Saved by the Bell” castmate Dustin “Screech” Diamond. I’d be happy to sign the petition on one condition: Haskins has to bring Elizabeth “Jessie” Berkley along as his personal assistant.

WHO IS KEVIN ECK?

For those who are unfamiliar with me, I come to WWE from The Baltimore Sun, where I was an assistant sports editor and the author of a pro wrestling blog titled Ring Posts. In between two stints with The Sun, I worked as the editor of WCW Magazine from 2000 to 2001.
Follow Kevin Eck on Twitter at Twitter.com/KevinEck_WWE. I will be live tweeting during Raw on most Mondays.