Year of the “Dragon”

As the WWE Universe anxiously looks ahead to this Sunday’s SummerSlam at Los Angeles’ STAPLES Center, at least one Superstar can’t help but reflect on last year’s August extravaganza and the incredible journey he’s taken during his first full year in WWE: Daniel Bryan.

“It’s been kind of a roller coaster,” Bryan admitted in a candid WWE.com interview while preparing for his SummerSlam bout with Wade Barrett. “Winning the United States Title last year was big, but then it seemed like I wasn’t on any pay-per-views after Survivor Series. A huge positive was switching to SmackDown [in the 2011 WWE Draft] and winning Money in the Bank.” (BRYAN VS. BARRETT SUMMERSLAM PREVIEW) 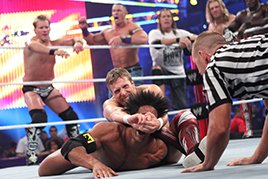 Indeed, one year after shocking the WWE Universe by emerging as John Cena’s secret weapon in Team WWE’s Elimination Tag Team Match against Barrett and the rest of his former Nexus allies, Bryan possesses a contract that guarantees him a World Heavyweight Championship opportunity at the time and place of his choosing. Furthermore, the mat tactician is the first Superstar in history to use his Money in the Bank briefcase to cement himself in a WrestleMania main event months ahead of time.

“Under no circumstances will I cash in my Money in the Bank contract before WrestleMania,” Bryan said assertively. “If I were to cash it in and win the World Heavyweight Championship when the champion was vulnerable, that would be the equivalent of a team winning the Super Bowl because the other team forfeited. Unless I truly earn the World Heavyweight Title, I don’t want to be the champion.” (WATCH BRYAN’S ANNOUNCEMENT) 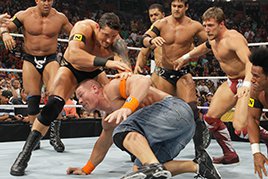 However, Bryan’s U.S. Title glory, subsequent Money in the Bank conquest and WrestleMania aspirations seemed an impossibility in the weeks leading up to last year’s Biggest Event of the Summer. As one of the founding members of The Nexus during the group’s controversial invasion of Monday Night Raw last June, Bryan was determined to make an impact in WWE following his embattled tenure as a season one NXT Rookie. Yet, after a clashing of ideals with Nexus leader Wade Barrett forced him to part ways with the group, few expected to ever see Bryan in a WWE ring ever again. SummerSlam 2010 changed all that. (WATCH BRYAN’S SUMMERSLAM RETURN)

Re-emerging as John Cena’s surprise final member of Team WWE – a group of uneasy allies united against The Nexus – Bryan made short work of several of his former cohorts, using his excruciating LeBell Lock to make Darren Young and Heath Slater desperately tap for mercy. Team WWE went on to win the match, but not before Bryan was eliminated by Barrett. Bryan had previously fallen to Barrett in singles competition during the inaugural season of WWE NXT, and being pinned by the calculating Brit once again only fueled Bryan’s desire to dominate in the squared circle and triumph against his former leader in their next encounter. (BRYAN VS. BARRETT ON WWE NXT)

“I’d really like to make Barrett tap out at SummerSlam,” Bryan said with conviction. A year after colliding in that fateful 7-on-7 bout, the rivalry between these two former associates burns red hot, especially after the submission specialist captured the coveted SmackDown Money in the Bank briefcase and revealed he would cash in his contract on The Grandest Stage of Them All. 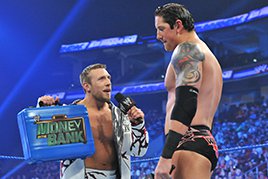 “Announcing that I am going to cash in my Money in the Bank contract has made me a target to Barrett and others because there will always be people who are bitter and jealous, especially in WWE, when they see somebody else with an opportunity they don’t have,” Bryan explained. “Barrett had his opportunity to win the Money in the Bank contract and he didn’t. He can try again next year.”

When it comes to facing adversity, the grappler once known in Japan as “The American Dragon” doesn’t merely blow smoke, and is more than willing to back up his words with swift action. Barrett would be wise to keep that in mind this Sunday. (WATCH BRYAN PUT BARRETT IN THE LEBELL LOCK)

“In the meantime, there are eight more months between now and WrestleMania for people to be jealous that I am going to be main-eventing WrestleMania XVIII, and I expect lots of them to come after me trying to prove it should be them instead of me,” Bryan said.

For more on this exciting submission specialist, check out “Daniel Bryan: Climbing to Glory” by clicking here.