Where Are They Now? Vader, Part Two

Vader became a major star in WCW, winning their top title three times during his stint with the company. Over the next five years, he cemented his reputation as one of sports-entertainment’s greatest super-heavyweights thanks to physical rivalries with Sting and Ron Simmons. His brutality became legend. One night, he powerbombed Cactus Jack on the concrete floor and knocked him unconscious. A year later, he severed the mad man’s ear during a wild brawl in Germany.

But what made Vader truly amazing — and devastating — was that with all of this size, he could still leap off the top rope. (PHOTOS)

“I’ve always thought that he was as athletic as any big man I ever saw,” J.R. said. “I mean, he weighed four and a quarter and he was doing moonsaults."

Still, despite his success in WCW, Vader remembered this time in his career politely, but not passionately. When answering questions, he chose his words carefully as if there were parts of himself he was either not ready to reveal or unwilling to look back on. He summed up legendary matches as “pretty good” and heated rivals as “good guys.” When Vader attributed the end of his time in WCW to the return of Ric Flair and arrival of Hulk Hogan, he did so briefly before adding, “I have no hard feelings. I wish everybody well.”

It all pointed to a man going through changes and that’s something Vader admitted to openly. As he continued to speak, it became clear what his time in Atlanta now meant to him.

“I was struggling with some bad personal habits,” he confessed. “I drank way too much. I was in a lot of pain with my knees and my back and my shoulders and started taking way too many pain pills.”

Active in athletics since childhood, Vader’s years on the gridiron and in the ring were catching up with him. The knee that he’d injured in college had become problematic, making the act of traveling from show to show a struggle for him.

“People don’t realize how hard it is to travel and sit in the same place for a long period of time when you’re 400 pounds,” Jim Ross said. “Then, address your injuries and rehab and you’re going to the gym and the diet. It’s very, very challenging for someone that big.” 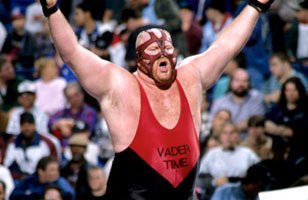 The Mastodon had his troubles, but he was still a tremendous performer who could throw down with the best of them. He proved this in 1996 when he stomped into WWE and battered legendary Superstars like Shawn Michaels and The Undertaker in pay-per-view main events. Although he never won the WWE Championship, the hard-hitting style he’d cultivated in Japan made him a competitor worth watching.

“He filled a major void for us at that time,” Jim Ross remembered. “He was that big, killer villain and he had some real good outings.”

After two solid years with WWE, Vader opted out of his contract in order to return to the rings of Japan. In his early 40s at the time, he knew that the matches overseas could be brutal, but the tours only lasted for a few weeks. He forced himself through these international trips for years and experienced significant success in the country, but eventually everything caught up with him.

“It got to the point where I physically couldn’t get on a plane and go do it anymore,” Vader said. “It didn’t matter what I took, didn’t matter how much alcohol I drank — I was just physically unable to continue.”

It has been said that an addict must hit rock bottom before they can begin to recover. For Vader, that moment came in 2007 when he returned to his beautiful house in Colorado, which was now empty. His wife had left him.

“That was the low part of my life,” he told WWE.com. “At that point I realized something had to change. Either I had to get busy dying or get busy living.”