Recalling Nitro with a BANG!

The Very Best of WCW Monday Nitro chronicles the rise and fall of the flagship program of Ted Turner’s WCW, which aired from 1995-2001. The 3-DVD set, available now at WWEShop.com, is hosted by former WCW World Champion Diamond Dallas Page, who recalls how he jumped at the opportunity to relive the many moments that he experienced firsthand, and offer his own personal feelings on the matches and moments featured on the DVD.

“I worked closely with the producers on what I wanted to say,” Page stated. “The last thing I wanted was to sound like a robot introducing the matches. Being involved and having the freedom to really speak from the heart adds an extra layer to this collection.” 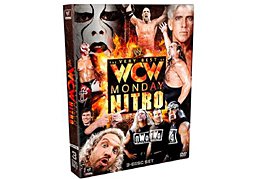 “One thing The Very Best of WCW Monday Nitro really captures, which I remember very well about WCW, was how absolutely electric the crowds were,” Page added. “It was a wild time and everything, both on Nitro and Raw, was smoking hot. The fans were crazy, and that’s what helped make WCW and WWE so successful.”

The first episode of WCW Monday Nitro took place on Sept. 4, 1995 at the Mall of America in Bloomington, Minn. Originally an hour-long program, Nitro eventually became one of the hottest programs on television under the guidance of Ted Turner and Eric Bischoff – and the arrival of two former WWE Superstars-turned-“Outsiders.”

“I loved when Scott Hall and Kevin Nash first started showing up,” Page remembered. “No one knew what they were up to, and this DVD really recreates that feeling as The Outsiders did whatever they wanted and started to destroy everyone in their path.”

The formation of the New World Order, led by Hall, Nash and “Hollywood” Hulk Hogan, was the proverbial spark that lit the fuse of the now-renown “Monday Night Wars.” According to Page, The Very Best of WCW Monday Nitro captures the earliest, most nefarious actions that made the black-and-white faction so despised by audiences everywhere. 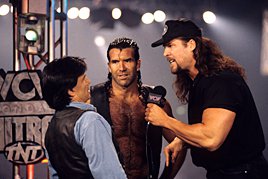 “Man, people were p****d,” DDP recalled of the nWo's effect. “It was really amazing, fans really threw garbage into the ring, especially when Hogan was around.”

In addition to a unique perspective on his relationship with The Outsiders and New World Order, DDP had much to say regarding what went down with Hall and Nash following his match with Mark Starr, all of which is available on the DVD. At the time, the nWo was actively recruiting DDP among other WCW competitors to join their ranks - until Page took out Scott Hall with the Diamond Cutter, forced Nash out of the ring, and established himself as one of the first WCW warriors to successfully stand up to the New World Order.

“The nWo pursued me for a while,” Page recollected about the incident in New Orleans. “To be perfectly honest, I think WCW management purposely kept me off Nitro for a while to keep the nWo from getting to me. That moment really allowed me to show my allegiance was to WCW.”

Page revealed, however, his decision not to join the New World Order was also personal.

“Kevin, Scott and I were actually pretty good friends up to that point,” he explained. “I had been tag team partners with both of them early in their careers, and I felt that I really helped them on their road to being successful competitors. Okay, Hogan was the third man, but then there was a fourth, fifth and so on. By the time they got to me, they were up to eight members or something. After everything we’d been through, they didn’t think of me until that far into their recruiting process? So, taking Scott down with the Diamond Cutter that night was my way of saying ‘No thanks.’” 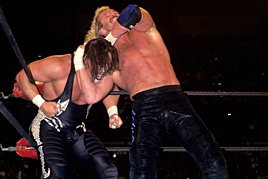 With the wild unpredictability of the nWo- WCW battle for dominance, it appeared Nitro had achieved a perfect formula for ratings dominance in 1997. Furthermore, WCW’s flagship program continued to offer high-profile matches every week, including “Hollywood” Hogan vs. Lex Luger for the WCW Title, “Macho Man” Randy Savage vs. Sting and Eddie Guerrero vs. Ric Flair (all of which are on The Very Best of WCW Monday Nitro). However, DDP’s WCW World Title defense against Sting is the one contest on the DVD that stands out foremost in his mind.

“Even though I lost the World Title, that was one of my toughest and favorite matches,” Page recalled. “The way that match ended ... man, it was exciting and so unpredictable. Fans of all ages will love that match.”

Page is also quick to point out it wasn’t only big-name competition that caught his attention – or that of Nitro’s audience. “One of my favorite things to do when I wasn’t competing was to watch the cruiserweights. If WCW and Eric Bischoff hadn’t brought in the cruiserweights, I don’t think the company would have ever gotten to where it was.

Two former WCW cruiserweights in particular, DDP adds, became shining examples of the talent that WCW underutilized when they later developed into World Champions at WWE.

“I was always impressed with Rey Mysterio. How he keeps doing what he does in WWE is simply amazing,” he said. “And Eddie Guerrero started as a cruiserweight... though he was always a World Championship-caliber competitor.” 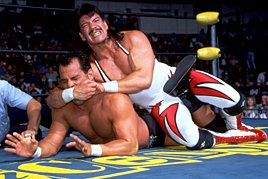 It was the underutilization of such talents that makes The Very Best of WCW Monday Nitro something of a history lesson for fans. Page refers to the early days of Nitro going up against Raw as “David vs. Goliath,” but when Ted Turner’s Atlanta-based organization became the giant, it wasn’t long after that Nitro’s iron rule began to rust.

“When something gets that big that fast, you are going to lose control at times and possibly lose complete control,” he said. “WCW was like The Beatles, but it was also like this big tornado, and I could feel things starting to unravel in the middle of 1999. As we got into 2000, that’s when it really started to get bad.”

With the firing of Eric Bischoff and the shift in management following the AOL-Time Warner merger that also ousted Ted Turner, WCW’s dominance in the ratings quickly began to fizzle, while WWE continued to innovate with the Attitude era. As featured on the 3-DVD collection, the disarray and desperation amongst WCW management became apparent during the January 16, 1999 edition of Nitro, and when WCW Champion Kevin Nash laid down for “Hollywood” Hulk Hogan’s infamous “Fingerpoke of Doom.”  It was a moment that may have been outshined only when actor David Arquette won the prestigious WCW World Title on an episode of WCW Thunder on April 25, 2000, one night after DDP won the title on Nitro. 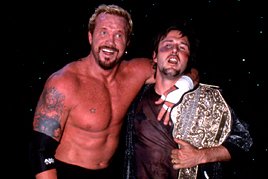 “I couldn’t believe it; I thought it was some kind of joke.” Page recalled. However, he also remembers the one positive outcome that came from Arquette’s title reign. “What many people don’t know is that when David signed up to compete, he didn’t do it for the money. All the money he made during his run in WCW, he donated to Brian Pillman’s wife."

After two years of ratings dominance, WCW Monday Nitro failed to recover from two years of questionable decisions by WCW management. Ultimately, the program – and WCW - would come to an end in March 2001, when WWE purchased its longtime rival. However, The Very Best of WCW Monday Nitro focuses a balanced look at the program’s shining moments, featuring eight hours of action with WWE Superstars such as Rey Mysterio, Big Show and Chris Jericho early in their careers. There are also WWE Legends and WWE Hall of Famers such as Dean Malenko, Ric Flair, Eddie Guerrero and The Road Warriors in some of their most competitive matches.

“There are so many great memories on this DVD; to me it’s only Volume One,” DDP said. “I really think WCW fans, and WWE fans past and present are going to be so jacked when they see this.”

For more on DDP, visit diamonddallaspage.com

The Very Best of WCW Monday Nitro is available now at WWEShop.com